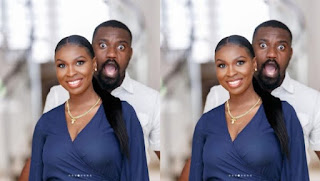 John Dumelo reacts after his wife Gifty sends a strong warning to Slay Queens to stay away from him.


While others are using the ‘Tik Tok’ app for funny and crazy videos to entertain themselves and their fans, she used it to reaffirm her love to her husband as she warns slay queens or side chicks to stay away from him.


She posted a video on her Instagram page saying no matter the number of times she argues with her husband, he’s still hers until she kills him then he becomes Jesus’ problem not hers. She said “I don’t care how much me and my husband argue, he’s mine until I kill him and then he is Jesus’ problem after that.”