Who is in the list of the 10 richest musicians in Nigeria?

Home Ranking Who is in the list of the 10 richest musicians in Nigeria? 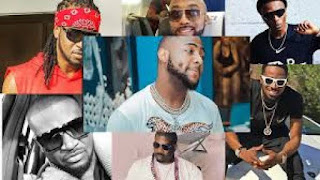 To find out who is the richest artist in Nigeria 2020, one should take into account the net worth of each of them. Nigerian Infopedia presented a long list with the net worth of the most popular musicians in the country.
Find out top facts about Nancy Shevell, the third wife of Paul McCartney
10. Flavour - $9.5 million
Chinedu Okoli, popularly known as Flavour, is a Nigerian singer who began as a church drummer.

9. Paul Okoye (Rude boy) – $10 million
It is impossible to fail to mention the former popular duo P-Square created by Peter and Paul Okoye.
8. Timaya – $10.5 million
This popular celebrity’s real name is Enitimi Alfred Odom, and he was born in Port Harcourt, Rivers State, on August 15th, 1980.

7. Phyno – $11 million
The musician's stage name, Phyno, means phenomenal. The singer is indeed a phenomenal personality because he has many talents and desires.
6. Olamide – $12 million
Olamide Adedeji is known in Nigeria as Olamide (his other nicknames are Olamide Baddo and BaddoSneh). The singer was born on March 15th, 1989, in Bariga, Lagos State. He is known for recording mostly in his native language, Yoruba.

5. 2Baba (2Face) – $16 million
Ujah Idibia, who is better known under his stage names 2Face and 2Baba,
This talented man was born on September 18th, 1975, in Jos.
4. Burna Boy - $17 million
Damini Ogulu, commonly known as Burna Boy, is a popular Nigerian singer and songwriter. His 2012 track, Like to Party, propelled him to fame.

3. Don Jazzy – $18.5 million
Famous Nigerian producer and singer Don Jazzy became rich and famous due to his musical talent, persistence, and ability to interact with people.
His real name is Michael Collins Ajereh, and he was born on November 26th, 1982 in Umuahia, Abia State.
2. Davido – $19 Million
Davido was born on November 21st, 1992 in Atlanta, the United States, but his family is Nigerian.

1. Wizkid – $20 Million
Ayodeji Ibrahim Balogun, better known as Wizkid, used to be a simple boy who adored singing and had enough talent and passion for music recording. He was born in Surulere in Lagos State, on July 16th, 1990.