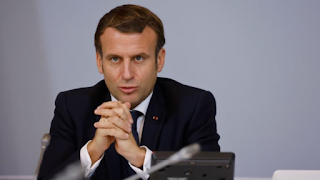 President Emmanuel Macron of France has issued a 15-day ultimatum Muslim leaders in the country.

Macron gave French Council of the Muslim Faith (CFCM) a 15-day ultimatum to accept "charter of republican values" which is part of a broad clampdown on radical Islam. He said the charter should include an affirmation of French values, a specification that Islam in France is a religion and not a political movement, and spitulate an end to any interference or affiliation with foreign countries.

BBC reported that CFCM has agreed to create a National Council of Imams which will reportedly issue imams with official accreditation which could be withdrawn.

The French President has strongly defended French secularism in the wake of the attacks, which included the beheading of a teacher who showed cartoons of the Prophet Muhammad during a class discussion last month.

In a meeting attended by head of the French Council of the Islamic Faith, Mohamed Mousavi and the dean of the Paris Mosque, Shams El Din Hafez, in addition to representatives of the nine federations that make up the French Council of the Islamic Faith (CFCM), Macron warned that "if some do not sign this charter, we will draw conclusions," adding that he "took note of their proposals".

Depending on the role of the imams, they will need to have a certain fluency in the French language and possess university-level academic qualifications.

President Macron has also announced new measures to tackle what he called "Islamist separatism" in France. The measures include a wide-ranging bill that seeks to prevent radicalisation. It was unveiled on Wednesday, and includes measures such as:

Earlier this year, President Macron described Islam as a religion "in crisis" and defended the right of magazines to publish cartoons depicting the Prophet Muhammad. Such depictions are widely regarded as taboo in Islam and are considered highly offensive by many Muslims.

Following these comments, the French leader became a figure of hate in several Muslim-majority countries. Protesters have also called for a boycott of French products.