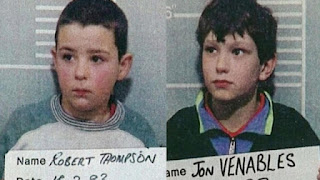 Anyone can be a killer, it doesn't matter if you are 10 or 20 year old. When you kill someone, then you are a murderer. Even if you change your name, had a surgery to change your face, or anything. You can't forget that you kill someone and that you a murderer. That will be forever attached in your name, in your brain and even to someone that knows your true color. You can't forget that, it will just linger in your memory, and it's a fact that you are killer.

Can you believed that a minor can kill someone? For example a 10 year old kid. For me yes, especially if that kid was just saving someone from like for example to be killed by someone else? They have understanding to everything even if they are just 10, they know what they are doing already, so yes.

But, what if a 10 year old kids, kill someone because, maybe because they want to. What if it was planned and they decided doing it, and it was to a 2 year old kid who is still innocent, they abduct him just to kill him poor baby. And this is a real story...

It was about a baby boy, who was separated from her mother, and the mother was just temporarily distracted and that's when she noticed that her baby is not with him anymore. Little did she know, her son was already............

Denise with her son James Patrick Bulger which is 2 year old that time, went shopping to the New Strand Shopping Center to shop. And while they are inside at a butcher shop on the lower floor of the centre at 03:40 PM, Denise who is busy looking around so she is distracted that she didn't notice that his son James Patrick was already gone, he disappeared while she is distracted.

The same day that James Patrick disappear. It was base on the CCTV on the New Strand Shopping Centre. It was taken that a 2 boy was observing every children that they can see there, and later they discover that they are actually looking for a target. And as for a preparation for a crime that they about to do, they are stealing different things like, batteries, sweets probably to attract their target and a paint.

And also, base on the CCTV the two boys seen approached James Patrick, talk to him maybe to persuade him to go with them. They took James Patrick hand, and walk outside th3 centre. They bring him into Leeds amd Liverpool Canal just a mile away from where the Centre. They are actually seen by 38 people, but they do nothing as maybe they are thinking that they are siblings. After walking, they went into a pet shop but got kick out.

Later on, after walking and walking they arrived in Village of Walton, Patrick is still with them. But the place was just near in the Police Station so they continue walking until Walton and Anfield railway station, this place was said to be just near in a cemetery of Anfield.

And so, the gruesome crime started. They can use now the thing that they shoplift in the Centre. One of the 2 boys started throwing a paint into James Patrick eyes. They also kicked him, stepped on him and threw a stones and a bricks at him. Imagine the pain that a 2 year old boy felt, when he experience it. It didn't stop there, because according to the police, the batteries that they steal was placed into James Patrick mouth and anus. And as their finishing move, they dropped a 10 kilogram iron bar into James Patrick, resulting a skull fracture. A pathologist of James Patrick case said that, he suffered too many injuries.

Look how smart this two boy, too smart for a 10 year old kid just to be a killer. To make it look like an accident, the two boy bring James Patrick in the railway tracks and put on a stone to his head thinking that a train would hit him and they will be saved for the crime that they did. They left the crime scene and after two days, James Patrick severed body was discovered, it was cut into half, it was on 14th day of February. And as the body was examined, the forensic said that James Patrick was already dead when he was hit by a train. They think they can get away from the crime that they do, it's unfortunate for them because they was still discovered as James Patrick killer.

After some test, they have a strong evidence that the one who killed James Patrick was the 10 year old kid Robert Thompson and Jon Venables. After so many legal proceedings as they are thinking that the two was just minor, on the year 1993, on the 24th day of November. Robert Thompson and Jon Venable by then was 11 year old and the first youngest murderer that was convicted of killing a 2 year old boy in the 20th century.

Don't be deceived by their innocent faces, because they are branded as a murderer.

An evil people hiding their faces by their innocent eyes. You will think that they can't hurt someone but the truth is, they can kill.