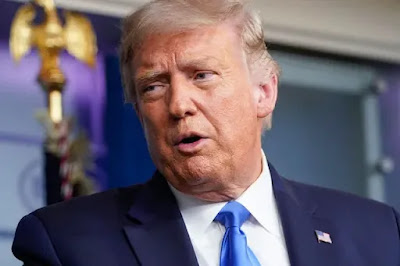 But, his appeal will not be considered, until about 10 weeks time.

Trump was suspended indefinitely by Facebook in January, following his serial breaching of the platform’s rules. Twitter banned him permanently.

Some of the posts also supported the insurrectionists who stormed the U.S. Capitol on 6 January, for which he was impeached by the House of Representatives.

‘We have decided that we are going to take this case,’ Thorning-Schmidt said on Tuesday in an interview with UK’s Channel Four.

‘It’s a very high profile case but that is exactly why the Oversight Board was created in the first place.’

She added that they are inviting public feedback on the case for them to look at and they have ‘already received public comments in the thousands and thousands’.

‘One thing I think is quite good about how we deal with these things is not only does Facebook have a statement about why they did what they did. The user can also put in their statement about their opinion,’ she said.

Facebook announced in January that it asked the Oversight Board to review its decision to suspend Trump on Jan. 7, the day after a group of the president’s supporters stormed the Capitol.

The Trump ban is the most consequential case yet for the Oversight Board, carrying far-reaching political implications for the nation.

Facebook’s Oversight Board launched last year to review the toughest calls the company makes. It is supposed to function as an independent entity but gets financial backing and technical support from Facebook.

The Oversight Board has 90 days to make a decision, but a ruling is expected more quickly. Its decision is binding and cannot be overruled by CEO Mark Zuckerberg or any other Facebook executive.