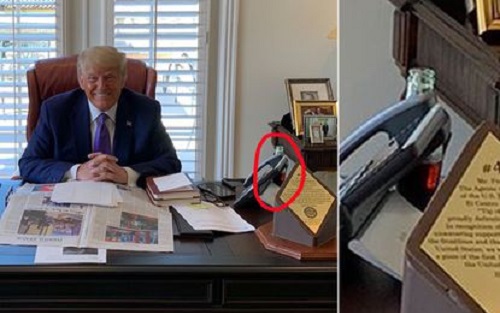 Donald Trump was pictured drinking his beloved Diet Coke despite calling on supporters to boycott the brand over Georgia voting rights.

The ex-president was spotted with a bottle of his favourite soda sitting on his Mar-a-Lago desk in a tweet posted by his former adviser Stephen Miller.

It came just days after Mr Trump called for a boycott of Major League Baseball, Coke and Delta Airlines, who have all protested the new restrictive voting rights law in the state.

The new law, recently signed by Georgia’s Republican Governor Brian Kemp, includes new identification requirements for absentee ballots, limits the use of drop boxes and criminalises giving voters water or food as they wait in line.

It has been harshly criticised by Joe Biden and resulted in a string of lawsuits from civil rights groups.